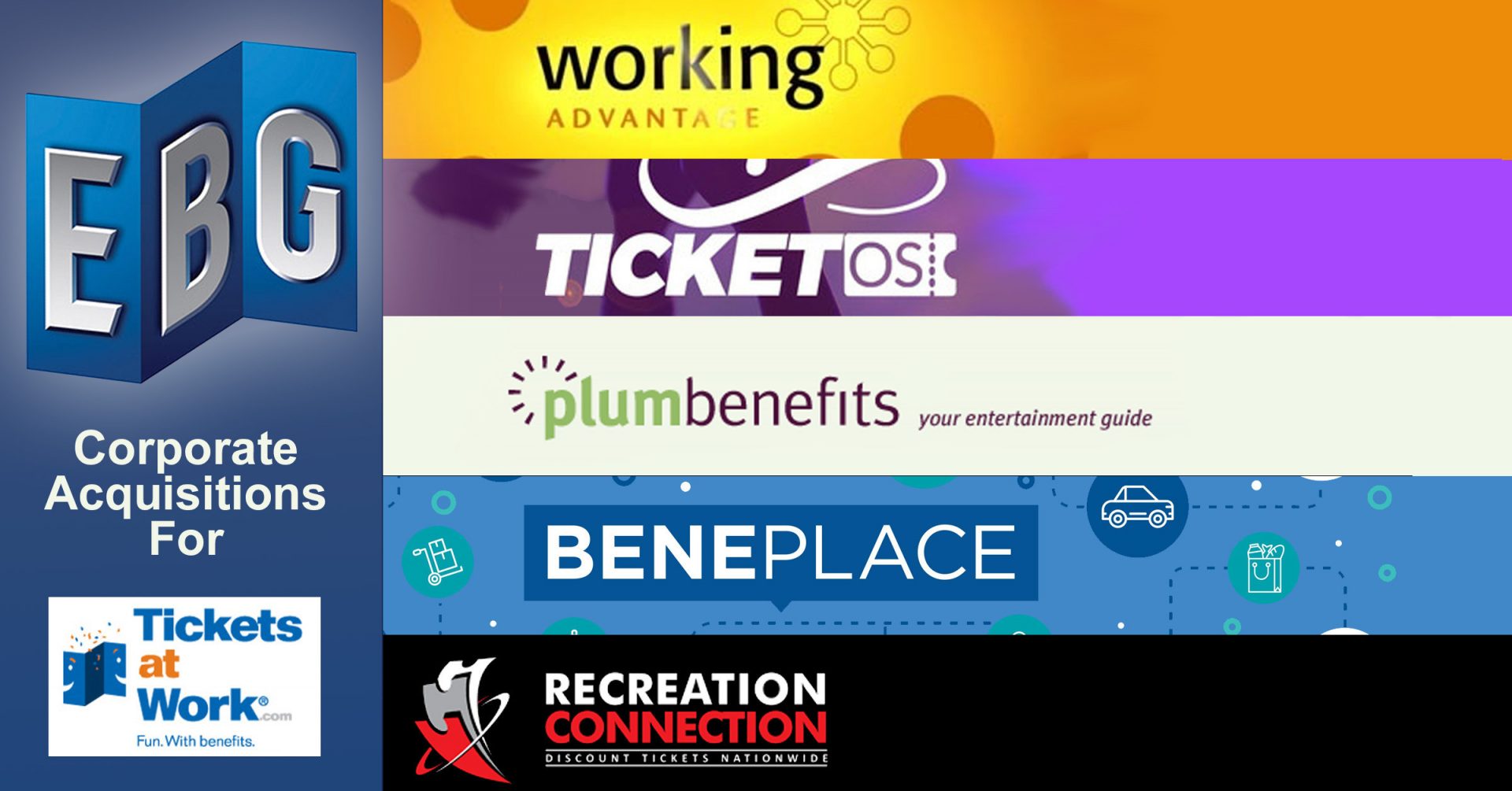 The size of Entertainment Benefits Group, and its flagship service 'Tickets At Work', has grown exponentially in recent years, but most of the growth has been through a huge number of acquisitions and a few mergers thrown in for good measure.

The financial investments from a number of silent partners and from public partners like Creative Artists Agency (CAA) and the Shubert Organization, have allowed the organization to go on a corporate buying spree that has never been seen before in this industry. Very little of the organization's growth has been through its own organic growth of its existing brands and its flagship employee discount service TicketsAtWork.com is a great example of that, which has increased in size by over 500% in just the last five years.

The privately held EBG organization appears to now have huge amounts of investment capital on hand to be able to acquire such a huge number of competitors in such a small amount of time. This sets up the company for an obvious and anticipated IPO, as they already own most of the genre and can show huge market ownership that impresses Wall Street analysts that see very little beyond the balance sheet and P/L account. With most of the growth coming through acquisition and very little of it through their own innovation, EBG faces internal problems of bringing such disparate groups together in the long term. In the one particular case of WorkingAdvantage.com, after buying them in 2015, EBG essentially threw all their dated technology and infrastructure in the garbage and ultimately just purchased the company for their client list, which is a very expensive way to grow an organization quickly and does not make friends of the employees who are now out of work. EBG’s seemingly endless company acquisitions has left the employee benefit market with very few independent players and the once healthy level playing field has now all but disappeared. What is left is a few other marginal players left to try to take on the size and might of EBG, but mostly without success. It will only be a matter of time before they too get bought out or even squeezed out.

When organizations end up owning a vast strata of business through acquisition, they may appear solid on paper, but something of their corporate soul has often been lost and the organization often begins to falter as the disparate groups are often unable to adopt a single corporate culture. After an IPO, the various divisions often will need to be spun off as separate entities, even though they looked very attractive on paper being together. It was often quoted that Wells Fargo was the biggest mortgage holder in the United States, but they were in fact the smallest of the mortgage originators, they just acquired most of their mortgages on the secondary mortgage market because they were not particularly good at getting mortgage customers legally, but they knew how to buy them afterwards and their buying power was their strength over all the other banks.

EBG likes to state that it has fueled its growth through partnerships with various parties like the Creative Artists Agency (CAA) and the Shubert Organization but the reality is that they are on a buying spree to get all the clients they can through acquisition and ‘Recreation Connection’ is another great example of that. Founded in 1995 by Bobbie Menkes in Los Angeles California, ‘Recreation Connection’ found itself both outmatched and outclassed by the overwhelming power of the EBG behemoth and they finally joined the Borg of the business world, as EBG continues to assimilate competing organizations that stand in their way for market domination and ultimately an IPO, where all the investors and c-suite fat cats can get rich. One of the biggest investors CAA expects a 1000% return on their investment.

Beneplace was a benefit service provider that supported Fortune 1000 companies, government agencies and other large organizations. The organization was majority-owned by Platform Partners, a Houston-based investment firm that had little interest in benefits or HR services and sold to EBG in October 2019 for a straight cash deal.

With little fanfare, but a handover of lots of cash and some stock, Jacob Ward, Brian Lefton and their investment partners sold TicketMonster to EBG in August 2018 and put an end to this free-thinking, progressive start-up that had accomplished a great deal since its inception in 2012. Both Ward and Lefton went on to executive roles in the larger EBG organization, but the EBG method of corporate acquisition and their modus operandi of the ultimate gutting of the original assets, usually values the hard assets of client data and relationships, over the players themselves. Ward and Lefton probably already know that and have built in some golden parachutes, which may include some stock when the corporation heads to its anticipated IPO.

To bolster its weak internal ticketing system EBG purchased TicketOS to deliver a ticket solution that allows EBG to sell more tickets in their own environment and pass less of the process over to their producer clients. Obviously organizations like Ticketmaster may allow an API integration, but it appears that EBG wants to eradicate the Ticketmaster model completely with this acquisition of TicketOS.

Founded by CEO David Nerrow in Boston, MA 1995, Working Advantage was originally created as the ‘Corporate Movie Club’ and offered discount movie theatre tickets and discounted VHS movie rentals at Blockbuster. In 2001 the company re-branded as ‘Working Advantage’ to better reflect its new line of entertainment and shopping products and services, but it suffered from still being a paper ticket based organization and in 2015 Nerrow sold the whole operation to EBG for pennies on the dollar of its value, which would normally run at three times total annual revenue, or ten time profit, whichever is higher.

Originally founded as SVM Benefits in 1995 by NYC business impresario Shara Mendelson, Plum Benefits delivered employee benefit offers to employees of NYC corporations. Mendelson sold the business to the Shubert Organization in 2009, who then in turn found they could not handle the untamed tiger that Mendelson had sold them and they sold it on to EBG in 2014. As per the EBG playbook, EBG gutted the infrastructure of the company and raided the company for clients and Broadway producer contacts, which effectively doubled their client list. They cut the Shubert Organization into a sweet deal that included cash and some stock and options, just in case they ever go ahead with their planned IPO. The thought of the untold riches that can exist for all the parties in the IPO was enough for The Shubert Organization to sell out and they continue to wait with bated breath for their big payday.

The EBG Method Of Corporate Acquisition

EBG appears to only make acquisitions that can feed directly into helping expand their cash cow TicketsAtWork.com and the model that it represents. EBG appears to feel somewhat secure in the organic growth of all their other brands, that probably do not deliver a great deal to their bottom line, when compared to the Tickets At Work revenue stream. EBG often talks of ‘value investing’, but that is just perhaps code for low-balling their buyout offers as they steamroll their way to market domination in the employee benefits field. After each corporate acquisition, EBG’s brand will operate the original company for a time with its original brand, but they often include a footnote E.G. “Plum Benefits...powered by Ticket at Work”. But as time goes on, the main brand of 'Tickets at Work' will be the only name that continues and each of the components that speak to the whole will be cast by the wayside.