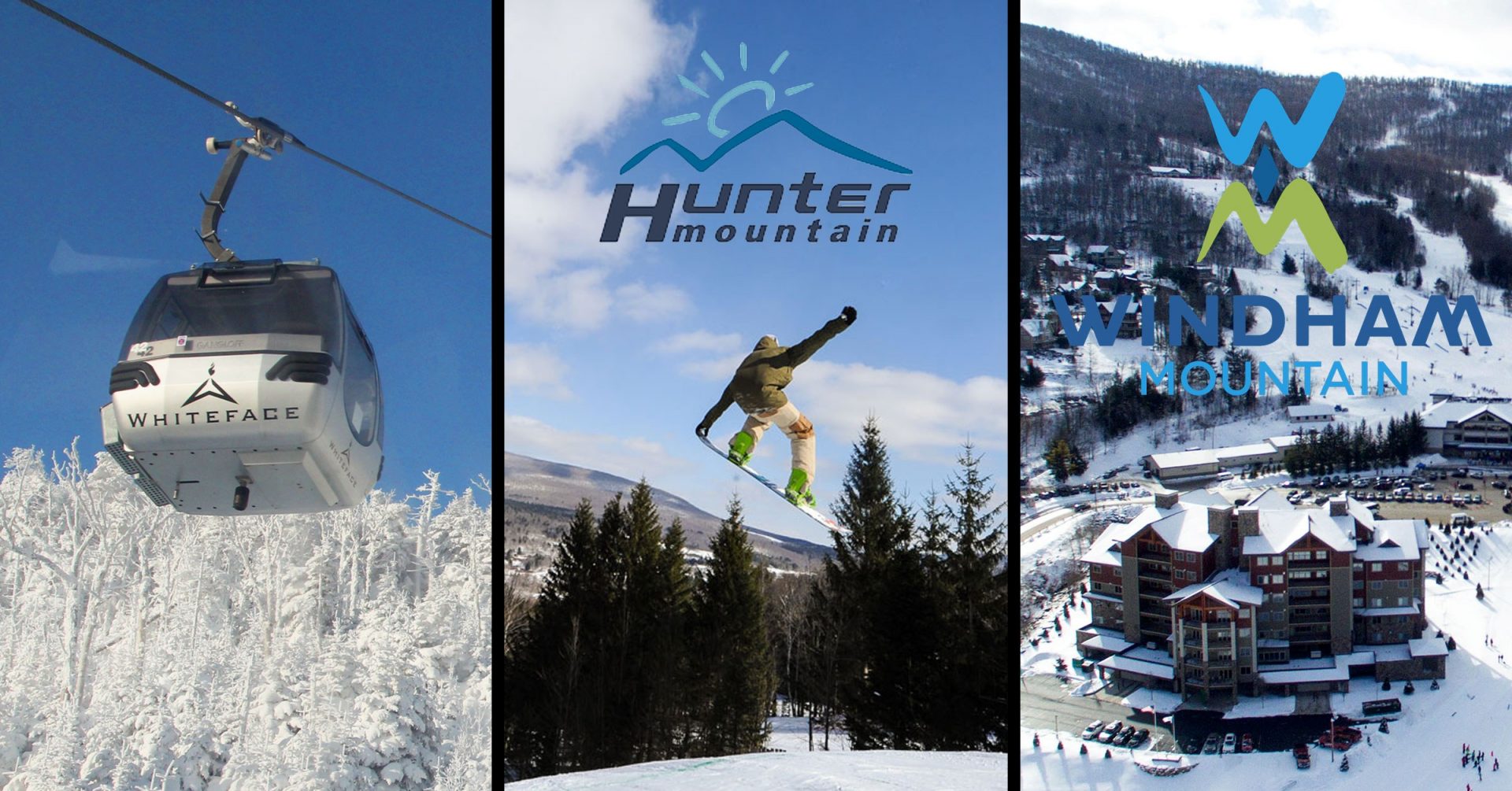 List of the best ski and snowboard mountains in New York, including: Whiteface Lake Placid, Windham and Hunter Mountain

New York is known for many things but one thing that does not often come to mind when thinking about New York are the ski resorts. Unknown to many, there are many top rated ski and snowboard mountains located in upstate New York and in its Catskill Mountains. Some of these mountains are where top Olympic skiers grew up and come back to and continue to practice Skiers like Andrew Weibrecht, Tricia Mangan, Tim Burke and Morgan Schild all hail from New York ski resorts. While New York does not have the same reputation as the Swiss Alps, many skiers and snowboarders are sill quite happy with the slopes there, despite the short season and icy runs.

Listed below is the phone number, address, some stats about the best ski and snowboard mountains in New York.

Ski and Snowboard Mountains and Resorts in New York

Whiteface Mountain is known for hosting the 1980 Winter Olympic skiing events and is still held in high regard within the professional ski community. The mountain still consistently hosts national and regional championships and is recognized as a national U.S. Olympic Training Site. Even though this mountain is used by pros from around the world, there is still a huge part of the mountain that is designed for beginners. 20% of the mountain’s 88 trails are rated with a green circle and are perfect for people who are just learning how to ski or ride. 38% of the trails are rated black diamond or harder. “Otter” is the easiest green circle trail and “Hoyts High” is the resort’s hardest double black diamond trail. This resort is known for its very cold weather with frostbite often being a bigger danger than the runs themselves.

Windham Mountain opened during the late 1950’s and is a publicly owned ski resort. The resort is located in the northern section of the famous Catskill Mountains and is approximately a three hour drive from New York City. There are two main peaks at the resort, East peak and West peak. East peak has more advanced black-diamond and double diamond trails while, West peak offers a wide range of beginner, intermediate and advanced trails for their guests to try. Windham Mountain is one of the only resorts in New York state that offers night skiing, because they installed state-of-the-art stadium styled lights on some of their less elevated trails on the mountain. Their night skiing is often very icy and most ski injuries occur during this time. Windham is very close to Hunter Mountain, another popular New York State ski resort.

Hunter Mountain is a large privately owned mountain which has existed for over 50 years. In 2006, the son of the owner of the resort reported, “Privately owned ski areas, like Hunter, do not operate on a level playing field in the New York state ski competitions”. This lead the resort to lose its reputation as a proper ski race training mountain. Nonetheless, the resort is still perfect for the normal day-trip skier who is simply looking to get some runs in when they can. “Bucky’s Run” is the mountain’s easiest green circle trail and “K-27” is the hardest double black diamond trail at the mountain. The mountain is often packed with NYC residents who travel for a day trip and local skiers complain that the out-of-towners bring a bad attitude to what would be a great ski environment. The mountain has been known for ski and snowboard rage and some gun violence has been a problem there in the past, due to its proximity to NYC.